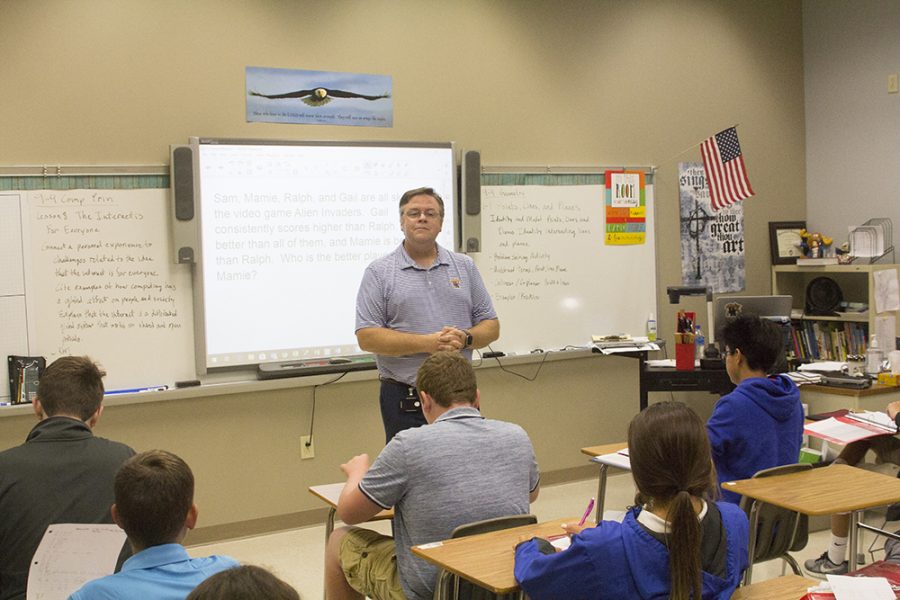 Gallery|9 Photos
Ben Philpot
Mr. Combs teaches Geometry. He also teaches AP Computer Science Principles and is the Technology Integration Specialist. Go see him if you have trouble with any of your log-ins.

Over the past two years, more than ten new teachers have come work in the high school. Some students only have one new teacher, while others may have several of them.  Whether students are in a class with a new-to-LCA teacher or just pass one in the hall, they may be interested to learn that there is much more to each one of these new faces than what they see. All of these teachers love to be here and all like teaching here for different reasons. Scroll down for information on the new teachers.

Mr. Combs may be a new teacher this year, but his face is familiar to many as he was a frequent substitute in both the high school and junior high last year.  He has been teaching for more than 30 years.  He spent 18 years at Henry Clay, but has also taught at Tates Creek High School, Tates Creek Middles School, and the Lexington School.  It seems right that he should have spent so much time in Lexington schools, since he is from here and graduated from Henry Clay High School. Currently, he teaches AP Computer Science Principles and Geometry.  He is also the Technology Integration Specialist for the high school, so go see him if you have trouble with Converge or any of your passwords.  In addition to math and computers, Mr. Combs is also a talented musician.  He played in the band and sang in the choir in high school.  He also used to sing in a group that won first place in a talent competition in Renfro Valley.  He likes that teachers at LCA are free to share their faith.  He adds, “We know that no one is fully educated who does not know their creator.”

Mr. Cross joined the staff last year. He teaches AP and Honors Chemistry. He is originally from Ashland, Kentucky, where he attended Russel Independent High School.  He held the high school football record for highest yard per carry average in the state for 18 years. Mr. Cross loves to play basketball and to spend time with his two kids. His dream career would be making his own furniture. His favorite thing about teaching at LCA is the students’ desire to learn.

Mrs. Ingram has worked in the Junior High for five years, but this year she is teaching Geometry in the high school for the first time. Mrs. Ingram is originally from Roanoke, Virginia and her favorite subject in school was, you guessed it: math. Mrs. Ingram was an LCA parent and her daughter graduated from LCA in 2016. She loves being creative, reading, shopping, spending time with family, and working out.

Mrs. Jarvis taught at Providence Christian Academy in Georgetown (where she also grew up) before coming to LCA in 2017. She attended Scott County High School before going to college to study forensic anthropology. While in graduate school she spent a summer in Portugal studying ancient remains. She decided to become a teacher and now teaches Honors Biology and Biology. Outside of school, she is a big sports fan and loves spending time in outdoor activities such as kayaking, hiking, camping. This summer, she had her first child and his name is Clay. Her favorite thing about teaching at LCA is the atmosphere where a lot of the students care about learning, and the students have a lot of support from their families.

Mr. Newman comes to LCA after six years at Trinity Christian Academy and two years at The Providence School.  Here, he teaches 10 and 12th grade English.  He grew up in Cynthiana and attended Harrison County High School, but he has lived in Lexington all of his adult life. He is married and has two young children, Silas and Owen.  Mr. Newman enjoys spending time outside with them, as well as fishing and playing board games.  Most people probably do not know that he has a black belt in karate.  He loves that the high school has “a diverse group of students who bring an amazing array of life experiences and outlooks into the classroom.”  He also likes being able to pray for one another here and that he is able to help make disciples for the Kingdom.

Mr. Overton arrived at LCA in 2017, after teaching at a Christian Academy-Lawrenceburg.  He grew up in South Georgia and attended Bradwell Institute for high school. He now teaches social studies and photography to students across all grades. Outside of school, he is a youth pastor at Man O’ War Church, where he has served for the past three years.  At home, he is married and has two kids named Cecilia and Porter. His dream career is teaching at a college. His favorite thing about teaching at LCA is the good resources available here, which include the helpful teachers around him.

Dr.  Parks’ first year at LCA was in 2017, after he had just recently retired from Scott County Middle School. Dr. Parks grew up in Lexington, where he attended Lafayette High School. After high school, he went to Eastern Kentucky University. He now teaches World Civilization to sophomores. Outside of school, he enjoys coin collecting and writing.  As an author, he has published several books. He also loves to travel and has been to the Middle East multiple times. His dream career is to teach another subject like Apologetics, but outside of teaching he would want to be a lawyer. His favorite thing about teaching at LCA compared to other schools is the students. He loves the way they give their best and care about leaning and God.

Mr. Ray joined the staff in 2017. Mr. Ray or ‘A-Ray’ is the Spiritual Life Director at the high school and as such is responsible for the Chapel services each week. A-Ray is originally from Lansing, Michigan and was a youth pastor there until he felt God calling him to move to Kentucky. A-Ray teaches Apologetics this year and loves consistently working with the students here. He also enjoys golfing, fishing, hunting, and working out. His dream career is what he is doing here at LCA.

Mrs. Watson joined the staff last year. She teaches engineering, statistics, and physics. She worked at Toyota for five years in quality design and training. She is originally from Sterling Heights, Michigan. Her dream career is to be doing what she’s doing now, or to be a car chassis designer. Mrs. Watson has an identical twin. Her favorite thing about LCA is the students here.

Mrs. Workman is the Algebra 1 and Algebra 2 teacher, and this is her second year as a teacher. This past summer, she was recently married, and many of her previous students know her as Miss Baldwin. Mrs. Workman grew up in Paintsville, Kentucky and attended Paintsville High School, where she enjoyed playing basketball and soccer. After graduating, she attended Asbury University for college. She majored in Math Education for Grades 8-12. Her favorite hobbies include reading, watching Netflix, and going to the movies. She also loves spending time outside.  Students love Mrs. Workman for her Christ-driven nature and kind heart.