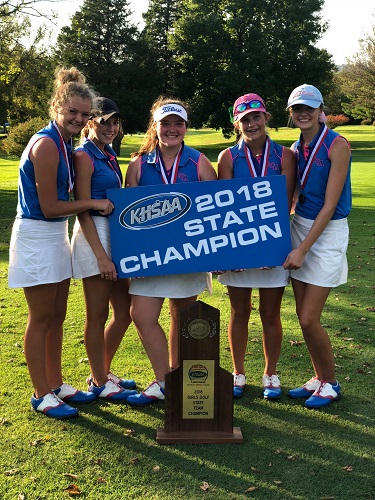 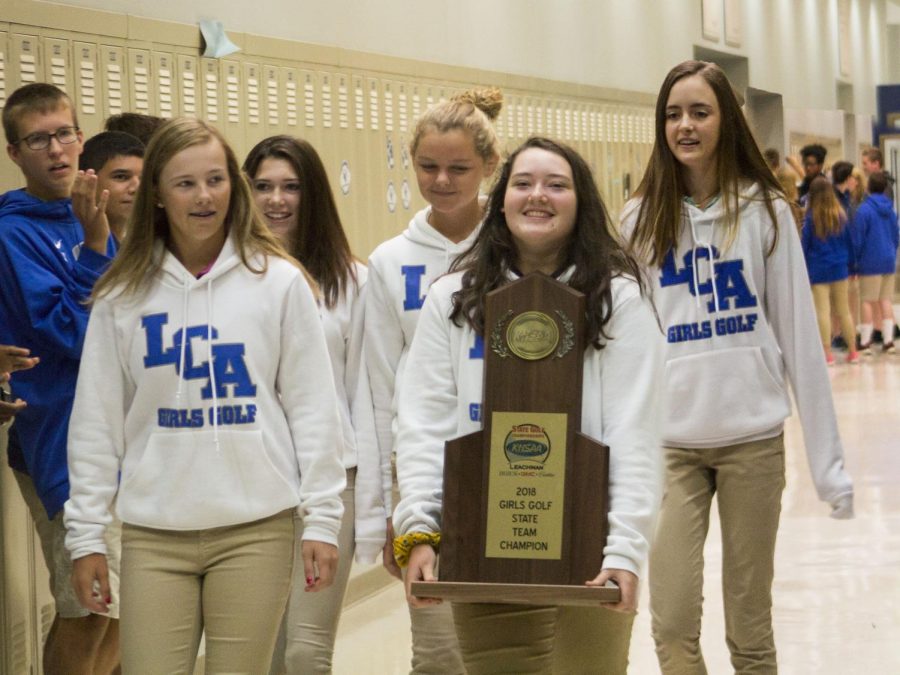 The Girls' Golf Team receives congratulations for their state championship during their Eagle Walk through the halls of the school.

The girl’s golf team won the Kentucky State Team Championship, and Junior Laney Frye won the individual state championship last week. The girls had a winning score of 63 over par, and beat the second-place team, Sacred Heart, by 8 strokes. This is the first state championship win for the girl’s golf team, and the first girls individual winner from LCA. The tournament took place at Bowling Country Club, where all golf state championships are held. After the first day, the team was in second place, behind Sacred Heart. They stuck with it and came back the second day, after the cut was made, and played well enough to bring home the trophy. Junior Delia Gibbs said this about the big win, “It was nice because all of our hard work payed off, and it was just fun to do it as a team.” The girls’ golf team members competing at the state tournament include Frye, Gibbs, Rachel Harper, 11, Emily Sparks, 11, and Mary Keene Marrs, 9.

Last year the boy’s golf team also won the team and individual state championships. The individual state champion last year was Junior Jansen Preston, he said something similar to Delia, “It was fun to win state because we came together as a team and worked together as one unit.” It wasn’t as good as a year this year for the boys, but they still finished third as a team. The girls had a very successful year in all, with multiple tournament wins this season. In golf, although it is an individual sport, everyone must come together to get the team a win, and that’s exactly what the girls golf team did last week to bring home the state championship. They put in hard work every day for the past few months and it all payed for them last week. 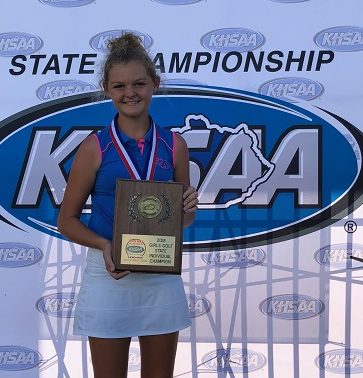 Laney Frye, 11, is Miss Kentucky Golf 2018, after winning the individual state title. She was also named to the All State First Team.

The accolades continue to pour in for Junior Laney Frye as  named her Miss Kentucky Golf 2018, recognizing her as the top individual female golfer in the state.  Each year, the Kentucky Golf House keeps points based on each golfer’s performance in seven regular season events, as well as the regional and state tournament.  At the end of the season, the male and female golfers with the most points are named Mr. Kentucky Golf and Miss Kentucky Golf.  Laney’s strong performance throughout this season propelled her to the top of the list.  Her recognition as Miss Kentucky golf comes just days after she won the state individual title during the state tournament.  The girls’ golf team also won the state team title.  Laney was further honored to be named to the All State First Team.  Junior Jansen Preston was named to the All State First Team for the boys.